The American University Center for Innovation has been an information pipeline for Kogod School of Business online MBA student Korey Salter, cofounder of the start-up Hydronomy, which aims to address the global water crisis.

When Korey Salter moved from Florida to Washington, DC, after earning his undergraduate degree from the University of Central Florida, he dove headfirst into his career on Capitol Hill.

“I wanted to go to a graduate school in the DC area, even though I intended on completing my degree online. I wanted to take advantage of what the area had to offer and get an education that was close to my professional life,” says Salter, who is currently pursuing an online MBA with Kogod.

Salter is highly motivated to expand his business acumen—in addition to his full-time career as the managing director of a political consulting firm, he’s one of three cofounders of the start-up Hydronomy, a company founded in 2018 with the mission of bringing a solar-powered atmospheric water generator to the market.

“We found a way to essentially create water out of air, using moisture from humidity,” says Salter. “This is something that a lot of people in the world need from a domestic standpoint.”

Salter’s cofounder Brittany Kendrick, a friend from his hometown in Florida, built the technology for Hydronomy as part of a team engineering dissertation at New York University. Although the project was a success, Kendrick’s team didn’t have further use for their invention. Realizing she had a potentially revolutionary idea on her hands, Kendrick invited her long-time, business-savvy friend, Salter, to oversee the operational side of a business endeavor to make the technology commercially viable. Salter brought in their third cofounder, Xavier Henderson–a friend from Salter’s undergraduate education–as the second technical founder. 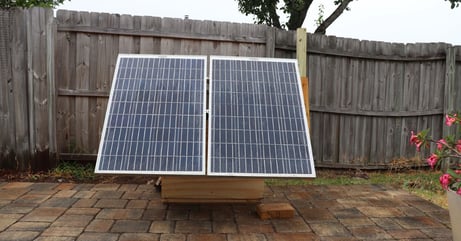 “I know Hydronomy is something that's going to impact people's lives. Every opportunity gets us closer to making it happen,” says Salter “I hope to really be a part of the solution.”

Hydronomy was accepted into the AUCI incubator as part of the spring 2021 cohort. The center accepts new ventures every semester, including summers, to offer new and established start-ups networking, funding, and educational opportunities with support from faculty co-directors and Kogod professors Tommy White and Bill Bellows.

“Since joining, the AUCI has been our support system and has given us access when it comes to the type of funding that we want to go after,” says Salter­. Funding is an especially crucial component to any start-up company, and since his day job centers around fundraising for political candidates, Salter is no stranger to pitching to prospective donors.

“My cofounders and I all have full-time careers outside of Hydronomy, and we didn’t want to take out a business loan, so we started by researching how to fund a start-up. It turns out, there are websites that can help match start-ups with venture capitalists and angel investors,” says Salter. “People put their hard-earned money behind these things. They understand your vision and believe in you.”

There are also accelerator programs for quick funding that invest in specific types of companies that match their missions. “Our company is sustainable; it runs on solar power, so these days, with everyone trying to find a way to build off of renewable resources and make fossil fuels obsolete, the sustainability aspect of our company gave us a doorway to walk into,” says Salter.

Even after putting over two years of work into their company–mostly focusing on funding and building prototypes–having access to the AUCI is a huge plus for Salter and his cofounders. “The AUCI has webinars about how to build a company, how to protect your intellectual property, how to gain access to undergraduate interns. There are also faculty members who may have connections to your industry or who are maneuvering in the same space that can help you bounce off some ideas,” says Salter. “AUCI advisor Kathryn Walters-Conte has been so helpful with our application to access Small Business Innovation Research (SBIR) funding. The AUCI has been an information pipeline.”

As of now, Hydronomy has three prototypes, and their patent is pending. They hope to establish a pilot program so that they can see their system working in real-time and collect data. Once their technology is proven, they plan to present it to a wider audience. “Our water exceeds Environmental Protection Agency standards, so our goal is to get over $3 million in non-diluted funding in the next year for research and development so we can scale our model up and down to fit the needs of different sized buildings and situations. One of our three current prototypes supports a family of three,” says Salter.

“If you’re really passionate about something, you just have to step off the ledge and get started. You’re probably going to be working harder at your start-up than at any day job, there will be long nights, but you can tell yourself, ‘I’m doing this because I believe that this product can really benefit people,’” says Salter. “And if you have the opportunity to create a product, be a part of the AUCI. I wish I would have known some of this stuff sooner and had all of these beneficial resources.”

If you have a business idea or a start-up that is already in motion, apply to be a part of the summer 2021 AUCI cohort.