Kogod MBA student Abolaji Omitogun is investing in his own business savvy so he can invest in entrepreneurs back home. 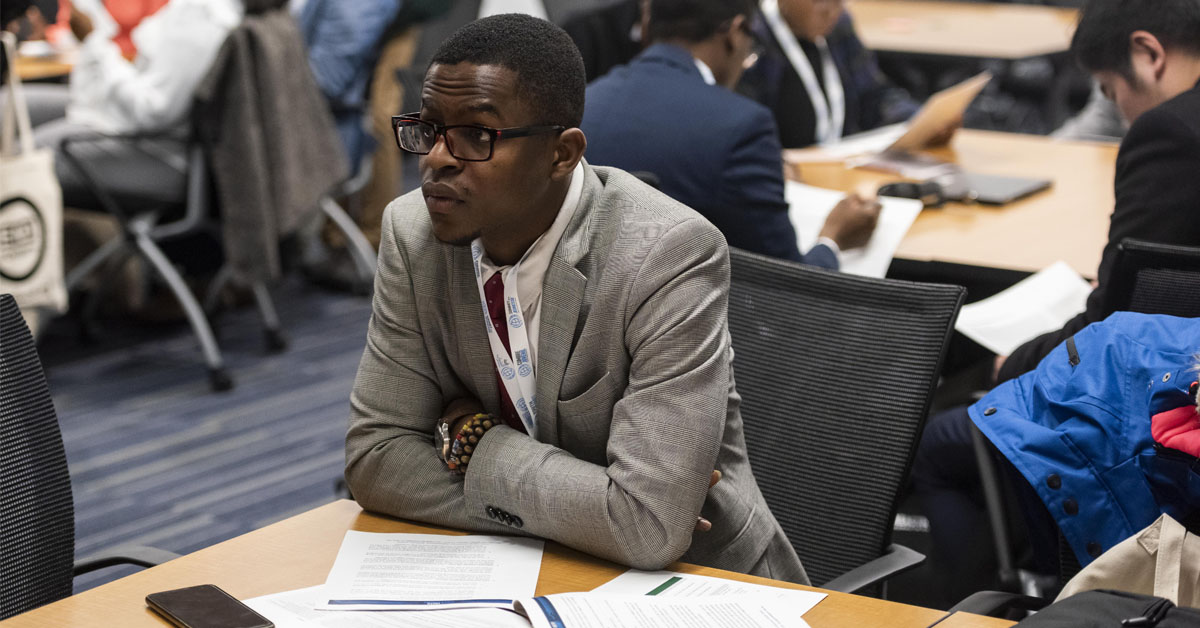 According to the African Development Bank, before the pandemic, 22 percent of Africa’s working-age population were starting their own businesses—the highest entrepreneurship rate in the world. Africa’s entrepreneurs are also younger than other nations’, with a median age of 31, compared to Latin America at age 35 or the United States at 42.

Despite its entrepreneurial verve, Africa remains a tough place for start-ups to succeed. At 8.4 percent, the nation also has one of the highest business discontinuance rates in the world—and limited access to capital remains a key reason why.

Abolaji Omitogun, MBA ’22, is ready for this to change. He’s seen the death of too many good business ideas in Africa, he says, and investible solutions.

Omitogun, a budding entrepreneur from Nigeria, wants to found his own venture capital company to help. This echoes his inspiration for pursuing business in the first place: to create economic opportunities in Africa—a region that is among the poorest in the world, with 1 in 3 Africans living below the global poverty line.

“I’m really driven by my desire to create opportunities for young people in Africa,” says Omitogun. “As a venture capitalist, I hope to raise funds to invest in African entrepreneurs, giving them exposure to larger amounts of financing.”

While additional capital doesn’t solve everything—African entrepreneurs also lack access to mentorship and markets—it does help ventures get, and stay, off the ground. Omitogun would also lock into a growing business trend in Nigeria, where start-ups have become key drivers of jobs and economic growth. The start-up ecosystem in Lagos has the highest value in all of Africa.

“There’s so much potential there,” says Omitogun, “but there just aren’t the opportunities. Business is a force to address this.”

Founding a venture capital company might be his most ambitious entrepreneurial pursuit, but it certainly isn’t Omitogun’s first. Before moving to the US for his fellowship with Atlas Corps, a service-oriented international exchange program for young business professionals, he launched a restaurant business in Ibadan, Nigeria, where he went to college; served as a business strategy consultant for several small businesses; and worked for a fashion e-commerce start-up company.

After serving with Atlas Corps, he knew he wanted to pursue his MBA, a goal he’d had for years, because he was finally sure how he’d use his degree. “I want to support other businesses with my knowledge,” says Omitogun, “whether it’s my own company or I’m part of others’.”

At Kogod, Omitogun isn’t slowing down. He’s continuing to build his portfolio of real-world business experience, taking advantage of the school’s hands-on learning opportunities to grow the skills he needs to succeed.

Most recently, he participated in the Venture Capitalism Investment Competition (VCIC), a global event that allows students to act as real-world investors. Omitogun—whose team won American University’s round—evaluated a mix of start-up companies, then met with actual venture capitalists to recommend where to invest.

He was also a runner-up in the AU Center for Innovation’s (AUCI) latest business hackathon, which challenges students to collaborate and brainstorm solutions to a complex business problem. And, he was just accepted into the AUCI entrepreneurship incubator. He can’t disclose project details yet, but Omitogun can confirm it will serve the transportation and logistics sector and asks that we “stay tuned.”

These experiences, while in an academic setting, provide essential fuel for Omitogun’s professional goals. They’re helping Omitogun hone the business skills he needs to launch his company—and to help others do the same.

After he graduates in 2022, Omitogun plans to join the start-up world, using this as a stepping stone toward his goal of founding his venture capital firm. “Start-ups are an exciting place to be. They’re dynamic because you get to do anything and everything,” he says. “They’re also what really create employment and get the economy going.”

Wherever Omitogun lands, though, it will be in service to his mission: creating economic opportunities at home by bringing other entrepreneurs’ ideas to life. “I want to create a fund or a company that will invest in young African start-ups,” he says. “My goal is to contribute to a company’s growth—and develop myself further in the process.”