Kogod School of Business graduate Yara Doumit channels her energy toward helping others after her home country, Lebanon, experiences a financial crisis and devastating explosion. 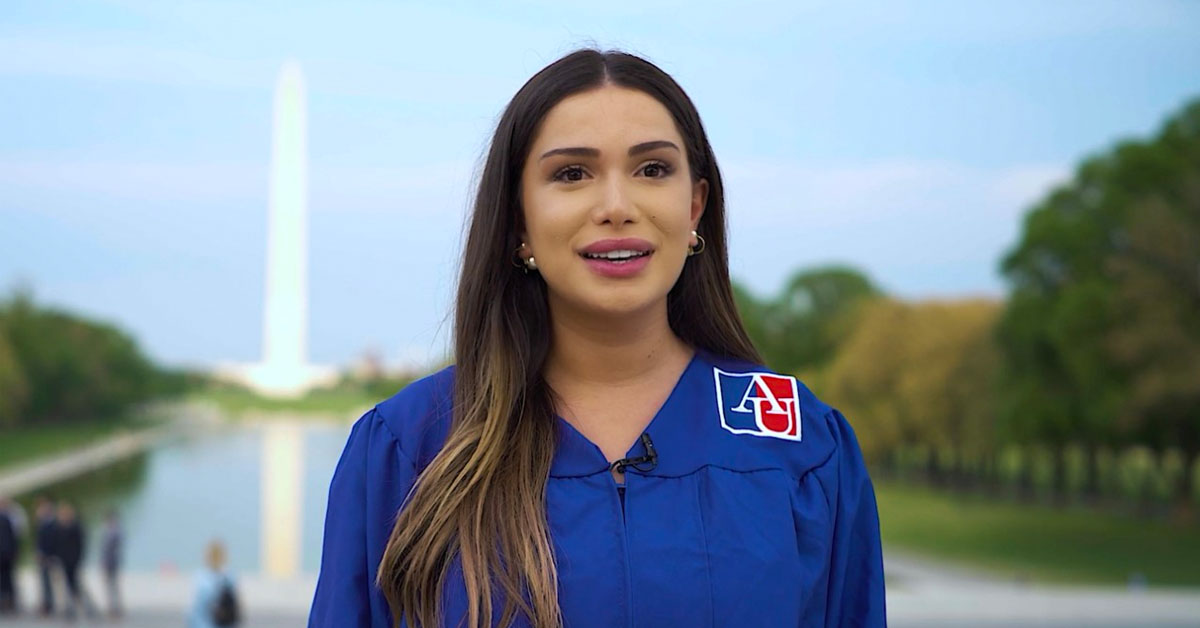 At the end of our interview, Kogod student Yara Doumit mentioned that Amazon offered her a position as a DC-area manager without even applying.

“It came out of nowhere,” says the business administration major with a specialization in finance and a minor in legal studies. “They reached out to me and said they saw my LinkedIn profile, read my resume, and saw some articles about me. They liked my leadership abilities.”


It seems like the kind of good news any other student would want to lead with, but Doumit’s final year at AU has been bittersweet—she is from Lebanon, which has been coping with not only the coronavirus pandemic but also a crippling and enduring financial crisis, as well as the aftermath of a devastating explosion which took the lives of more than 200 victims and left over 300,000 Beirut residents temporarily homeless.

Instead, Doumit wanted to start our conversation by telling me about the financial crisis, a result of decades of government corruption and mismanagement. After what is now known as the October 17 Revolution, thousands of protesters took to the streets to demand a new government, and Lebanon’s financial and political situation has continued to deteriorate.

However, one of the little-covered aspects of the financial crisis is Lebanon’s ever-fluctuating currency exchange rates. A Google search won’t bring up much current information, which is exactly the problem that many Lebanese students studying outside of the country are faced with right now.

“When you go online, and you search ‘what’s the value of one Lebanese pound’ it will still show you the same value as it was four or five years ago. The only current rates you can find are from the black market,” says Doumit. “Only small news sources, like this one, are writing about it because you’re actually inquiring about it. But imagine telling your university why you can’t pay your tuition all at once and not having any way to show them why. Our currency dropped against the US dollar tremendously. The financial situation was even worse than during the civil war because even then, the currency didn’t drop as much.”

Because of the instability of Lebanon’s currency, its banks are restricting transfers of money abroad. “They have the numbers in their systems, but they don’t have the cash against it,” explains Doumit. To get the money they need for tuition, Lebanese students in the US and worldwide have been forced to turn to the black market.

“After the explosion, there was no way to exchange your Lebanese pounds with the bank. You had to go to the black market, and it would be ten times the normal rate,” says Doumit. “Lebanese students were paying ten tuitions, and people were protesting, asking to just let the students finish their educations because it’s embarrassing everyone in front of their universities to not even have proof of what was going on.”

Doumit and her friends talked about how they could present the situation to their universities, how to talk to their financial aid offices, how to prove the currency crisis even existed, and more. Since so many people were having the same problem, Doumit chose to take action.

“I had many meetings with Dean Delaney and Kogod’s associate dean for undergraduate programs, Casey Evans,” she says. “I explained I would pay, but it was going to be a slow process because of the limits from the banks. They were so understanding.

“My friends were contacting me for help, so I shared how I communicated with my university, and I started circulating the letter that I used as proof–it was signed by lawyers in Beirut and many banks. Over 200 students ended up using this letter.”

But that’s not all—Doumit held meetings with lawyers, parents, embassies, consulates, and more to create and send more letter templates about the financial situation of Lebanese students to universities. “Newspapers and politicians started to get in touch with me, and they said, ‘Let’s make this a law to help students who are currently in university finish their degrees by letting people transfer money at the previous rate for tuition,’” says Doumit.

Doumit contributed to the creation of the Student Dollar Law, which has already benefited over 3,000 students and continues to help more as students are still applying for it today. “It really is all because of the support from Dean Delaney and Casey Evans. They showed me that it was possible, that we have many alternatives to the situation, and we could make it work,” says Doumit.

She also received support from Kogod professor Meredith Burnett, who helped with the template for a letter to universities explaining the new law, as well as Kogod professor Tim Timura, who conducted an independent study for credit called Lebanon Financial Case Study after seeing how scared Doumit was of the financial crisis. “We researched it and published everything,” explains Doumit.

Then came August 4, 2020, when 2,750 tons of ammonium nitrate stored in a warehouse at a Beirut port exploded.

“Everyone thought it was happening within their own building. We thought it was either terrorism or an earthquake,” says Doumit. “It was the worst sound you could ever hear in your entire life.”

Doumit was watching a movie with her friends in Ashrafieh, Beirut–only five minutes from where the explosion occurred–at the time of the explosion. They panicked and ran down ten flights of stairs to the street, where they were confronted with the horrifying reality of what had happened.

“Everyone around us was covered in blood. The street was covered in shattered glass. No one was thinking about COVID anymore. My friends and I weren’t injured, so we immediately started driving hurt people to the hospital,” says Doumit. “For a month straight, we didn’t sleep. We just kept helping those in need near the affected areas of Mar Mikhayel and Gemmayzeh, blocking windows with paper and aluminum because insurance companies were broke from the financial crisis and couldn’t help.”

Doumit and the other young people of Beirut rallied to provide relief, working with several NGOs to distribute food, ovens, washing machines, and other essentials to those in need. “Because we were on the ground helping, we could see which areas needed certain things more. I was just thankful that my family only had material destructions. I was able to provide help for other people, so that’s all I did,” says Doumit. “The feeling of reward that I got from being able to help rebuild the city is enough.”

Now, Doumit is looking at a transition from her part-time job with the Export-Import Bank of the US to her role as DC-area manager with Amazon. She plans to gain as much experience as possible and bring it back to Lebanon. With her resourcefulness and ability to take action, there is no doubt that she will be invaluable to her home country, not just as a business person but as a citizen.

“Don’t be afraid to reach out to people who can help you,” she advises. For many Lebanese students, Doumit is one of those people.