Kogod accounting student Nadeeya Harrison knows first-hand that every interaction is an opportunity to make a connection. 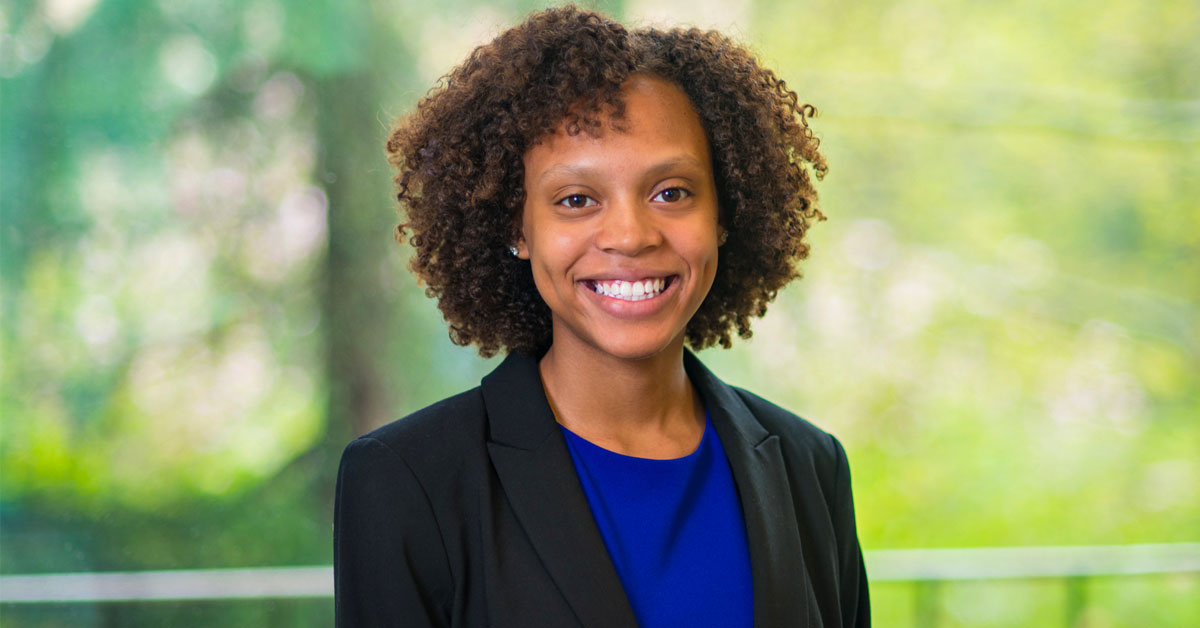 You may not know Nadeeya Harrison’s name, but you’d undoubtedly recognize her. She’s been a staple at Kogod’s front desk for years, guiding students, faculty, and lost parents alike as a student worker in Kogod’s office of operations. Fielding questions from students and making copies for faculty may not seem like the obvious choice of job for an accounting major with a minor in information technology, but Nadeeya learned long ago the secret to making any job a launchpad for success—networking.

“Working at the front desk of Kogod was really the experience that I made it out to be,” says Harrison. “I know some people choose to sit at the desk and not talk to anybody, but I am outgoing in general, so I made a point to say hi to everybody. I got to meet every professor, and not in a classroom setting, which is different. It made it easier to talk to them if I needed help in class.”

The idea of “networking” elicits groans from both students and seasoned professionals, conjuring images of uncomfortable clothes, sweaty handshakes, and awkward conversations. But networking isn’t something done at a set time in a set place. It happens while you simply live your life—exploring your passions, learning new hobbies, and meeting new people.

A common misconception among aspiring professionals is that schmoozing with insiders in your desired industry is the way to get ahead. But studies show this isn’t true. The number one predictor of career success is simple—being in an open network.

In an open network, you’re meeting and talking with people from all industries and backgrounds, constantly being exposed to new ideas, whether they’re related to your career field or not.

So what is a closed network?

As you might have already guessed, it’s the exact opposite—staying comfortable among a group of people who already know each other and share the same ways of thinking, whether that’s an industry, religion, or political party.

Individuals in open networks move through multiple social groups, creating unique relationships and experiences that people who only move through one never develop. An open network gives you a more accurate view of the world, a leg up on the competition, and fresher ideas.

Simply by striking up a conversation with anyone and everyone who walks through the doors of Kogod and beyond in her everyday life, Harrison has created invaluable relationships that have propelled her to academic and personal success, as well as a better long-term view of her career.

In fact, when Harrison first started at Kogod she made it a point to meet with as many professionals as she could so that she could be certain that she was on the right trajectory for her happiness. This meant discussing more personal topics. “I originally came in as a finance major, and before I even took the intro course, I ended up meeting specifically with Black women managers at Goldman Sachs and JP Morgan just to hear about their experiences outside of work. I was interested in work-life balance once you made it to a management position,” says Harrison. “One of the women I met with said ‘I would say that I am a mother, but I’m not a mom.’ So then I kind of had to decide on my path because I wanted to have kids, but I also wanted to choose a career that I could stick with from the start and grow with as I moved into adulthood and having a family.”

It was thanks to family connections and mentorship through the Frederick Douglass Distinguished Scholars Program at AU­—a merit-based achievement that focuses on students who are dedicated to social justice—that she was able to meet with the women who ultimately helped her realize her passion lies in the more flexible field of accounting versus the time-consuming world of finance.

Harrison also has a mentor-mentee relationship with Professor Catalin Stefanescu, which began before she ever even took one of his classes. “I met him working in Kogod’s office, just helping him print copies. When I was a TA for MKTG-300, I held office hours in the student lounge. He would see me there studying in-between helping other students. I would ask him questions about a course that he taught a different section of, and it evolved into him asking me about my post-grad plans and connecting me with other students of his that had experience with finance or Big Four companies,” says Harrison. “It all came down to me being in the right place at the right time, and since I took one of his courses for the first time last spring, I’ve been a TA for that course the past three semesters.”

Once Harrison was well underway with her accounting courses, Professor Stefanescu’s advice is what helped her solidify her post-graduate plans. “He advised me to take his class, FIN-368, and a class in R,” Harrison explains. “I really enjoyed it, so I started to take some more analytics classes, which led to my minor in I-tech.”

She added the minor only one year before her intended graduation date, May 2021. Her introduction to these classes and eventual interest in the topic led to her acceptance into KPMG’s Master of Accounting and Data Analytics Program, which includes one year of graduate school and a three-year employment contract with the company.

For others who are looking to open up their networks, Harrison offers simple advice. “A lot of networking came by attending so many Kogod events, which was connected to my office operations job, but it made it so I could be so much more involved, even in the online format,” she says. “I learned about other areas of business, and it really opened my eyes to what I enjoy, as well as aspects of business that I’m not as interested in. Attending events is a great way to meet professors, hear what they have to offer, and see all the talent within Kogod.”