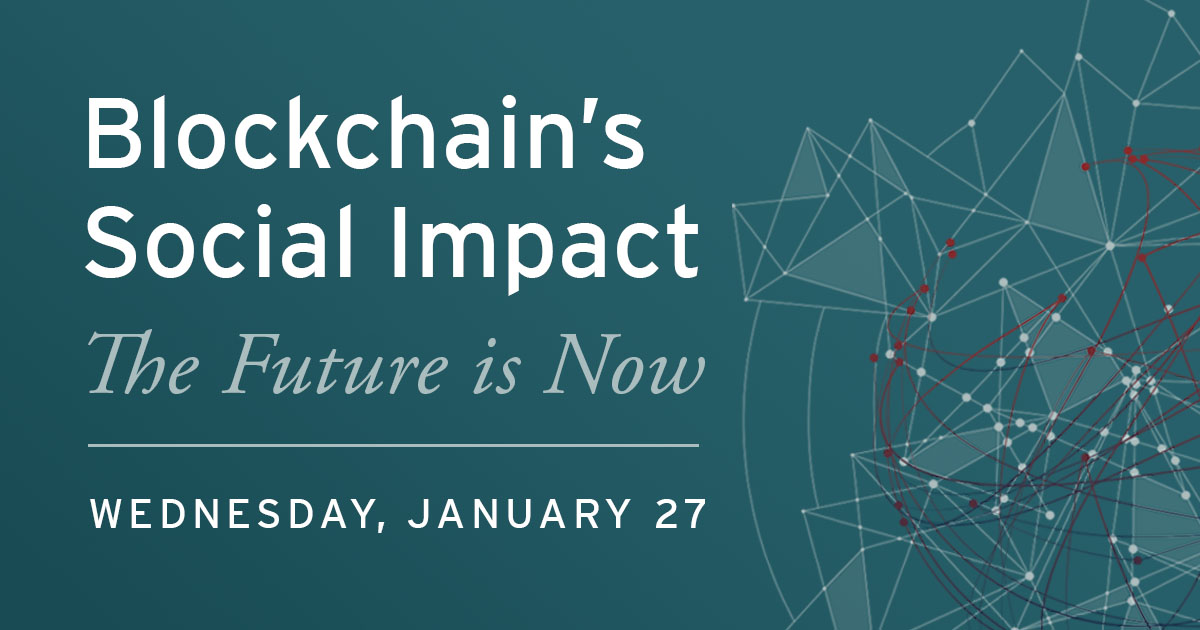 On January 27, 2021, Kogod’s Blockchain Hub will be hosting its third annual Blockchain Forum.

“The big headline this year is that the Global Business Blockchain Council (GBBC) is hosting the event with us, and we hope this will blossom into a long-term strategic alliance between the hub and the GBBC,” says Kogod professor and codirector of the Blockchain Hub, Bob Sicina. GBBC is one of the largest associations of businesses focusing on blockchain, representing over 220 institutional members across more than 50 countries. The council was formed in 2017 at a session of the World Economic Forum in Davos, Switzerland, where their headquarters are located, though they also maintain offices in Washington, DC.

“What also makes this year’s forum different from prior years is our alignment with the basic mission of Kogod: using business as a force for meaningful change,” says Sicina.

This year, the forum will be built around social impact use cases, focusing on the largest global news story from the past year—COVID-19.

“The former chief information officer of the Department of Health and Human Services (HHS) will talk about an application that HHS implemented to help with the reporting of COVID that uses all the strengths of blockchain in terms of it being heavily encrypted, each data element being timestamped, and how the combination of those makes the data immutable and also highly transparent,” says Sicina. “If there were to be another pandemic in the future, the number of use cases for blockchain would greatly expand.”

Just how do blockchain and COVID intersect? Blockchain is used to track and trace information–exactly what contact tracers do today when determining how someone who tests positive for COVID-19 caught the disease and who they may have spread it to. We also saw a possible use case for distributing personal protective equipment to hospitals that were running low back in March and April; now we can see a need for this technology in distributing the vaccine to the public.

Understanding the fundamentals and newest use cases is invaluable not only to business students and professionals but those working or interested in any field that tracks, organizes, and distributes information.

“Not just Kogod students but students from SIS, SPA, and CAS should all have a strong interest in blockchain use cases,” explains Sicina. “For example, on my roster for my spring class, Blockchain Applications, 40 percent of the students are from outside Kogod.”

The conference is called “Blockchain Social Impact: The Future is Now,” because, as Sicina explains, blockchain is unfolding much like the Internet did fifty years ago, and there is no doubt that even the already-existing use cases for blockchain are assisting with social issues like financing the un-and-underbanked and aiding in natural disaster relief.

“Over a period of many years, blockchain will develop similarly to the Internet. It will dramatically change how business is done, how government interacts with constituencies, and will impact and touch our lives perhaps as profoundly as the Internet has,” says Sicina. “The Internet caused people’s habits to change slowly, and blockchain will do the same. The future is now.”

The forum will feature many esteemed speakers–Tomicah Tillemann, Hernando de Soto Polar, Dante Dispate, Lesly Goh, Jose Arrieta, and many more­–giving updates to use cases that were presented at last year’s forum, as well as plenty of new presenters like the former president of Estonia.

“Estonia has one of the most advanced government applications of blockchain of any country in the world,” says Sicina. “It’s quite remarkable. A visionary president leading a visionary government has done widespread application—everything from IDs to driver’s licenses to property registration.”

The best part of having the forum via Zoom this year is that attendees can easily pop in and out of sessions that are of most interest to them.