CCO of Procter & Gamble discusses using advertising as a force for change. 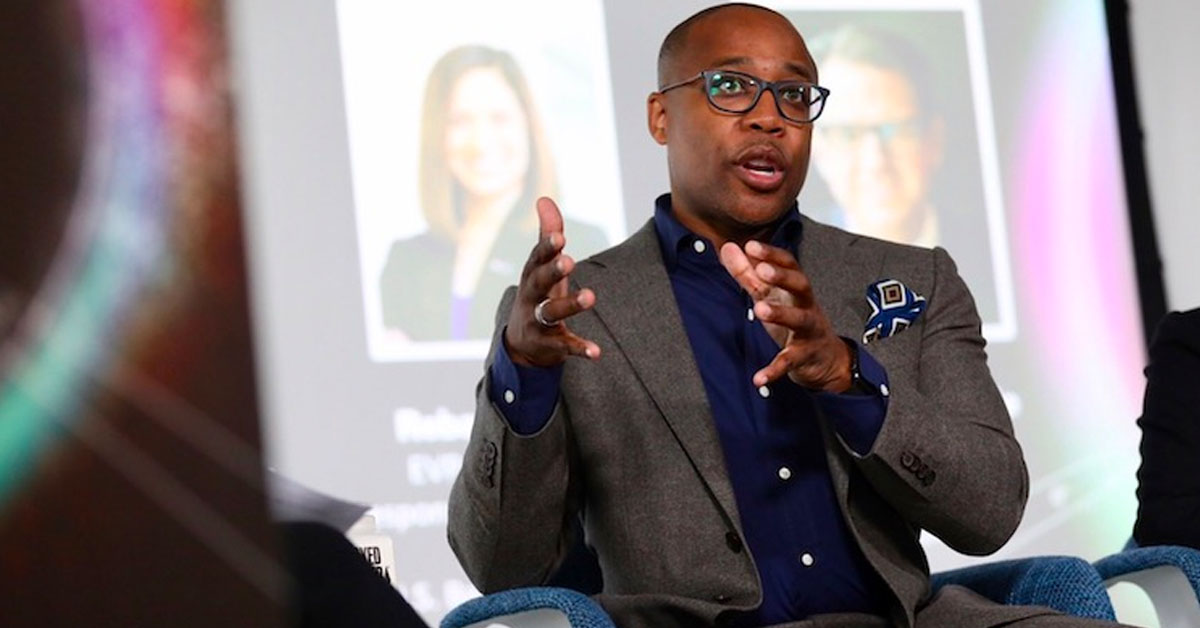 Beyond Social Responsibility: Antiracism in the Marketplace at P&G is the inaugural event in the Antiracism in the Marketplace series, co-hosted by the Kogod School of Business and AU’s Antiracist Research and Policy Center. Moderated by Kogod professor Meredith Burnett, chair of Kogod’s Diversity and Inclusion Committee, “Beyond Responsibility” featured an in-depth discussion with Damon Jones, chief communications officer at Procter & Gamble, who is leveraging the company’s advertising prowess for antiracist advocacy.

When Damon Jones, chief communications officer at Procter & Gamble, produced “The Choice,” his goal was influence—and sparking discussion. “The images we put out into the world affect how communities see themselves. We try to support discussions that need to happen,” Jones shared with Prof. Burnett in the inaugural Antiracism in the Marketplace event.

“The Choice,” a 75-second video ad urging action against racism, is not the first Procter & Gamble has produced. In 2017, P&G released “The Talk,” a short video that illustrates racism in policing, and “The Look” (2019) on microaggressions that Black men face.

The video campaign was born from a larger company vision: harness its global advertising prowess to advocate for social justice. Taking this approach, Jones said they’ve seen an incredible uptick in brand engagement, with the highest sales in over 15 years.

Read on for more of Jones’s insights from his discussion with Prof. Burnett, including how living an antiracist vision has helped transform P&G from the inside out.

From Awareness to Advocacy

“Far too often, we put the burden of driving equity on the people who are already burdened,” said Jones.

We must see the world for what it is, he told Prof. Burnett, then take action—which is why P&G created their Take on Race website as a companion to the video campaign. The site features a slew of free resources—including recommendations on what to read and organizations to support—as tools to advocate for antiracist solutions.

The ultimate vision: that everyone recognizes that our inequality as a nation is rooted in institutional racism.

“The important part is that we’re not pointing fingers at each other,” Jones said, “but that we all get busy trying to fix the problem. And the keyword here is all.”

Reflecting with Prof. Burnett on how this approach has impacted P&G’s bottom line, Jones shared some sobering data: 9 out of 10 consumers say they want companies to have a point of view. And 67% say they’re more likely to support a brand that shares their values.

What we do strengthens connections, he explained, and people choose brands they have an affinity with. “We believe the [social justice] work we’re doing, like with “The Choice,” helps build this affinity,” he said.

Jones acknowledged that not everyone would agree with P&G, but that ultimately, the company’s intention is what matters.

“We don’t expect everyone to share our values, but we do want everyone to understand where we stand and why it’s important. We have to speak truth to power,” he said.

None of this would be possible, Jones said, without the right company culture. “We have to address a lot of the skepticism we receive about this work within our own walls [first]. We need everyone to bring their voice to the table,” he said.

Jones shared an anecdote with Prof. Burnett that illustrates why: “Every summer, we hold a session on corporate citizenship for our new recruits—and it always goes over time. Potential employees are asking tough questions because they want to work at a place that shares their values. They want to know we’re not just thinking about what’s right for P&G but what’s right for the world.”

We take that seriously, he said, because “employees are always our number one target audience.”

Jones concluded the discussion with advice to other companies who want to become antiracist. “Engage everyone,” he said. “In order to be effective, antiracism must be built into how the organization operates, not just a diversity department.”

For example, at P&G, the person selling Tide every day is also responsible for ensuring that department lives our values, Jones told Prof. Burnett. “In this way, it becomes the work of many, not just of a few,” he said.

Jones also highlighted the importance of transparency from leadership—and that companies should anticipate resistance. Everyone starts this discussion in a different place, he said, and “some people have never had these types of discussions. Everyone must get there in their own way.”

Lastly, companies should “aim for progress, not perfection.”

“Don’t let the fear of having to be perfect prevent you from starting this journey,” said Jones. “We all have a lot of work to do and are on this journey together. Start there.”

Watch Prof. Burnett’s full interview with Damon Jones, and stay tuned for our next Antiracism in the Marketplace event!